The History of Floating

In 1954, John C. Lilly, M.D. and Neuro-Psychiatrist, invented the first isolation tank, which was simply an 8 foot cube filled with ocean water. Completely submerged, wearing a mask with oxygen, he used this prototypical tank to further his exploration of the limits of human consciousness. When studying psychoanalysis at the US National Institute of Mental Health (NIMH) in the 1950’s, John Lilly and his associate Dr. Jay Shurley M.D., were interested in the origins of conscious activity within the brain. They wondered if the brain needed external stimuli to stay in the conscious state. This sparked the first experiments with sensory deprivation. J.C.L. tested the absence of stimuli on the brain by creating an environment completely and peacefully isolated- the first isolation float tank was born.

In his experiments, subjects was suspended in an upright position and entirely submerged into the tank of water. Their heads were covered by an underwater breathing apparatus and mask made from moulded rubber. Not attractive or comfortable.

During these floatation experiments it was found that virtually all major external stimuli had been eliminated. The conclusion to this experiment was not only of “richly elaborated states of inner experience” but also to his surprise one of “profound relaxation and rest”.

Over the years, through trial and error, he was able to improve upon the tanks design. Subjects now float horizontally on an Epsom Salt solution, without the distraction of a breathing mask, allowing for the deepest state of relaxation possible.

By the late 1960′s, Dr. Lilly had the idea of floating in a supersaturated solution of Epsom Salts was far more comfortable. This solution was found to be non-irritating to the skin, while at the same time buoyant enough to keep the body naturally at the surface of the water, eliminating the need to wear an oxygen mask. By completely enclosing the water, maintained at skin temperature by using water heaters, an air pump to keep the air clean and a filtration system, Dr. Lilly was able to create a unique environment for meditation and scientific research.

Word soon got around about Lilly’s tank and a computer engineer called Glenn Perry came along to try the floatation tank for himself, fascinated by the results he used his engineering skills to build and design a tank that was inexpensive and relatively easy to build and maintain. Lilly made full use of Perry’s tank design. The demand grew for Perry’s tanks to be installed into homes of people who had been involved in Lilly’s experiments.

At the same time Perry met and married Lee Leibner, an educator who had studied floatation for several years for helping hyperactive and learning-disabled children. They quickly merged their strengths, building and marketing the first tank designed for home and commercial use. By the late 1970’s the market had grown rapidly, Gary Higgins of Float to Relax Inc came out with a modestly priced home tank and began opening FTR centres all over the United States and became known as the “Big Mac” of floating. More publicity came when celebrities like John Lennon, Kris Kristofferson and Robin Williams acquired float tanks. 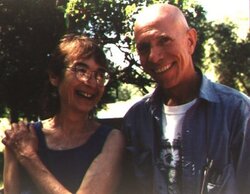 Glenn Perry and his wife, Lee.
In 1983 tanks were being used in Health Spas and Hydro’s, which have exploded in popularity in the last 10 years.

Since the floatation tank, alternative devices have been introduced one of which is the Hydrofloatation Pool using Dead Sea Salt rather than the conventional Epsom Salt.

Though Isolation tanks have been around since the 1950s, they got a big North American boost from the 1980 Ken Russell film Altered States, in which William Hurt’s character experimented with floating.

Peter Suedfeld and Roderick Borrie of the University of British Columbia began experimenting on the therapeutic benefits of flotation tank usage in the late 1970s. They named their technique "Restricted Environmental Stimulation Therapy" (REST). 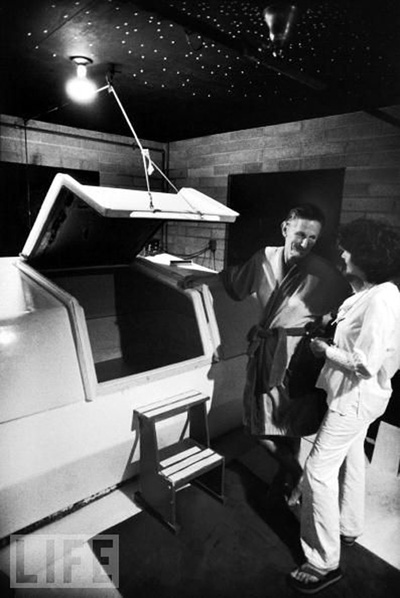 John C. Lilly and his wife
Floatation tanks have evolved since they're creation, and will continue to develop into the ultimate sensory deprivation experience. Through any array of tests and speculation, the isolation tanks have proved to be a key resource in relaxation and meditation, and thanks to the innovative creators, the float tank will be around to stay.