Himalayan Salt is regarded as nature’s ioniser. Negative ions are what give the air freshness. An example of this is after a thunderstorm – you may notice that the air “smells fresher” and clearer. Or, when you are at the beach – the salty sea air is charged with millions of negative ions.

Our general health and well-being is affected by the quality of air we breathe in. Salt lamps improve the quality of the air, increasing the number of negative ions present by up to 300% and recreating the natural environment.

Negative ions were originally used to speed up the recovery process in burns victims and asthma patients. Studies conducted later on found that negative ions affect serotonin levels in the bloodstream, stabilise alpha rhythms and have a positive impact on our reactions to sensory stimuli. This improved alertness level can lead to better learning and heightened concentration. 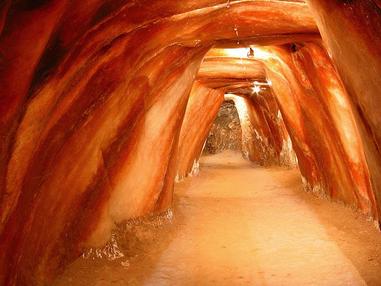 Himalayan Salt Mine
For generations Europeans have recognised the benefits of using Rock Salt Lamps for the treatment of an array of ailments such as asthma, allergies, rheumatism, high blood pressure, migraine headaches as well as chronic fatigue syndrome. The air is also cleansed by the negative ions generated, ridding the environment of pollutants such as dust, dust mites, pollen, allergens, odours and cigarette smoke. The Salt Lamp also has the power to kill bacteria, viruses and to counteract the positive ion charge released from televisions, computers and other electrical appliances. By reducing the number of these pollutants, ailments such as sinus problems, hay fever and migraines can be greatly reduced. The intensity of asthma attacks can also be reduced as well as improving the performance of your immune system, decreasing the risk of contracting colds and flu.

Salt Lamps can also counteract the everyday stresses placed on our bodies by the modern world. The quality of the air we breathe in has a major impact on our wellbeing. Breathing in pure, clean air not only keeps us alive, it improves concentration and helps improve the quality of our sleep. Studies have shown we obtain 56% of our required energy from the air we breathe in. This is more than we receive from food and water combined! On an average day we roughly inhale 37 pounds of air, the size of an Olympic swimming pool! This is why pure clean air is so important to your health and salt lamps are a great way achieving this.

The Himalayan salt crystal binds the negative ions with the excess positive ions. When the lamp becomes warm, through a process called “hygroscopy”, water molecules in the air are attracted to the warm salt. The salt absorbs moisture and the crystal will be damp on the surface. This builds up the ion field. Through the lamp, the positively charged atmosphere of a room can be neutralized.

Learn more about where these special Salt Lamps come from in the video below.